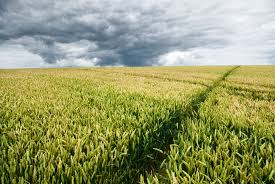 [ Fascinated by machinery, a Japanese farmer bought a big foreign tractor to grow his corn and apples in northern Japan. Thirty years ago he had a conversion, however, to growing organically, a conversion that involved learning about sharing, about participating in nature’s gift economy.  Below is one of his experiences. ]

The giant tractor transformed the overgrown waste land into fields at an amazing speed. The power was sensational. Neat fields of corn of the sort found in those foreign magazines appeared amongst the dense thickets. They were the Honey Bantam variety. It was probably thanks to the fertile soil that they grew so well.

However, he was troubled by the damage caused by racoon dogs. Just when they were ready to be harvested, the plumpsweet corn was ravaged.

‘I placed traps in several places around the fields, but ended up trapping a young raccoon dog. The mother stayed next to it, and didn’t run away when I approached. When I tried reaching out to release the trap, the young raccoon dog bared its teeth and got really upset. It seems harsh, but I held its head down with my rubber boot as I released it from the trap. It didn’t run away though. Right in front me, the mother started licking the young one’s wounded leg. Seeing that, I felt I’d committed an awful crime.

I told them ‘Stop eating our corn!’. But then I started leaving small piles of second-rate corn around the edges of the fields. When you produce corn you end up with quite a bit of corn that looks something like my toothless mouth. They’re not good enough to sell. I left it all. The next morning when I went to the fields, they’d completely disappeared. But the raccoon dogs had caused no other damage at all. So at harvest time I decided to stop using the traps and put out the cobs with kernels missing. After that, damage by the raccoon dogs stopped almost completely. So I figured that farmers suffer this sort of damage because they take everything. That was what came to mind. After all, we’d turned what used to belong to the raccoon dogs into fields. I worried that if I actually fed them, the raccoon dogs would end up being even more bother, but that didn’t happen. Which I thought was strange. I suppose you could say that my eyes were opened to the mysteries of nature. Anyway, I realized that nature didn’t work in the way that most people thought. This was probably the turning point as far as my ideas about so-called ‘efficient’ agriculture were concerned.