Literature or movies, romance is the favorite genre for the people of Pakistan and subcontinent for long. Well talking about Urdu Novels, Pakistan has produced many great writers who have accomplished their work in the same genre with great versatility and depth. Following is the list of 10 best Urdu Romantic Novels in no particular order

Mustansir Hussain Tarar the author of the novel; he not only did a wonderful job in expressing the feelings of its characters with his magical words, but while reading this novel one can also enjoy the history and description of some famous places in Paris. Pyar ka pehla shehar is one of the most romantic novels of all time. It is a story of a handicap person falling in love, beautifully portraying that love is not only for beautiful or physically fit people rather everyone can fall in love.

Aleem Ul Haq Haqqi is a big name of Urdu Adab. He contributed a great work for it. His field is Novel writing. He writes for many digests of Urdu, like Suspense Digest. He wrote many novels, but his most famous and successful novel is Ishq Ka Ayn. The novel is a story about Ilahi Bakhsh, a poor person from Abbottabad, the beautiful valley of Pakistan, and Sadi (Sadia) a rich girl from Karachi. Ilahi Bakhsh goes from Abbotabad to Karachi to earn money and starts a job of loader in Karachi.
His Ishq (Love) with Sadi was Ishq Majazi (the love with human) but turn into Ishq Haqeeqi (the love with Allah) and he becomes a saint and his dua (pray) is approved by Allah Almighty. The book is very interesting and when one starts reading it, it is quite hard to leave it before finishing the book.

Khuda aur Mohabbat a fascinating novel written by Hashim Nadeem is totally worth reading. It consists of two parts: One that deals with Emotional conflict, and other one deals in religious conflict. Both the sides gradually develop keeping the readers engaged and entertained. A mind griping story for sure! 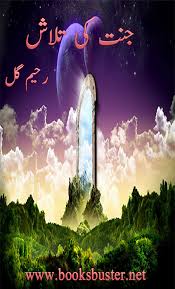 Jannat Ki Talaash is a prominent Urdu novel by prominent Pakistani writer Rahim Gul. This is a sort of itinerary than a novel, as the four characters including the main character (Imtal, a girl) traveling in northern areas(Pakistan) and Baluchistan (Pakistan), and discussing with each other and with other people (travelers,Drivers, officers, servants, and hippies)the true purpose of life and human being. during their journeys they came upon various types of people e.g. gypsies, people living in mountains, people with small means, and compared their status of happiness and satisfaction with their own happiness and satisfaction.The story and most of the dialogues is mainly narrated by & between two characters (Imtal and Waseem). I am giving it four stars as I did not enjoy the unnecessary philosophy in this book, and the contradicting statements of characters and the characters life style. and last but not the least, I do not like this book because I believe, “to see poor people and taste their food is just an adventure for rich people”.

Raja Gidh  is one of the most widely read and acclaimed Urdu novels. Gidh is the Urdu word for a vulture and Raja is a Hindi synonym for king. The name anticipates the kingdom of vultures. In fact, parallel to the main plot of the novel, an allegorical story of such a kingdom is narrated. The metaphor of the vulture as an animal feeding mostly on the carcasses of dead animals is employed to portray the trespassing of ethical limits imposed by the society or by the religion. Bano Qudsia has written this novel drawing on the religious concept of Haraam and Halaal.

Apart from the above implication the novel has many social, emotional and psychological aspects. The nostalgic narration of the historical Government College Lahore and of the Lawrence Garden Lahore lights upon the days of seventies and eighties.

Peer-e-Kamil (English: The Perfect Mentor) is a story focusing on a deviational sect which violates the finality of our Prophet (P.B.U.H) meanwhile, narrating a heart wrenching journey of two unhappy souls; Salaar Sikandar, a genius with an outstanding I.Q who has complicated queries about life and Imama Hashim, an ordinary girl with a stable family. Both are poles apart in terms of spiritual awakening. Destiny maneuvers their lives to cross each other’s paths, until Salaar falls in love with Imama after facing a horrifying experience that totally changes the course of his life.

Humsafar is a beautifully written romantic novel on the strong relationship of husband-wife, which further gets strong by the bond of their children. The story of the novel reinforce that the life partners not only need love to live a happy married life but trust and confidence in each other. It also plays a major role in one’s life.

This is Ruswa’s masterful retelling of the life of a courtesan of Lucknow, a woman of culture, charm and wit. As well as a poet, dancer and singer. Rich in historical detail, the novel captures the spirit of old Lucknow and its elegant decadence.   Umrao Jaan Ada is an integral part of Urdu adab. The story is based on the Lucknow Nawab culture of 19th century. An interesting story of a courtesan named Umrao. Her real name was Ameeran who goes through the different stages of her life and finally makes a futile search for her parents. Who were kidnapped by the village baddie during her childhood and sold to the ladies at the Bazar e Husan, the innocent Ameeran (Umrao) grows up to love and admire the power she possesses to control men’s hearts with her beautiful and canorus voice and her superb classical dances. This is the story of the loss of innocence as a child girl turns into a woman and then a famous courtesan.

Very sad reality! This book has a powerful message about what pakistan really means delivered by the character Bano! Read the book and u’ll start about those who struggled for Pakistan back then in 1947. This book touches a raw nerve. The things that happened to Bano and her family happened to my family, and thousands of others, so I have to compose myself every now and then. There was a massacre of people and then there was a massacre of the trust.

Amrit Kaur is written by Amjad Javed is a very famous novel. It is based on the hardships of love across the borders. It is a story of the partition in 1947 that created many love stories full of grief, sorrow and loss. It is about those beautiful relationships of people living together for years who suddenly became strangers and even enemies.

So which of these inspired you? or you want to add your list or selection, comment below.

Destinations Pakistan Calls for Responsible Tourism – Be mindful, the Flamingos have arrived in Lake Ucchali

Fahad Sheikh Stuns the audience with his phenomenal acting in DUNK